There’s a term that often describes many Business Intelligence product purchases.  And that’s, “A flash in the pan.”  That’s a saying we use to describe brief success that can’t be repeated. In the world of BI, Business Stakeholders are very often given demos that are just that… a flash in the pan. That is, the tool demos super well, and really wows the business stakeholders. But when it’s time to productionize the BI solution, Business Stakeholders are back where they started, with frustrating data integration issues and something that wasn’t nearly as sexy as the demo.

This issue just keeps coming up over and over, so I had to somehow address this in a video. So, I guess you could call this video a public service announcement, helping companies avoid a BI mess.

The first thing that Business Stakeholders need to understand, is that the vendor demo is usually connecting to static data.  I mean even if you give a vendor your data in a file, they’re STILL working against a static file. And there are tremendous advantages to building BI against static data.  For one, you can manipulate that data file so that the data looks nice and queries fast. The same is true for the vendors “demo environment” which likely is connecting to an enterprise database which is storing static, unchanging data. This pristine data which BI vendors use to showcase their BI tools is nothing more than a Jedi mind trick. The moment you connect analytics to a LIVE database with regularly updating records, the level of complexity grows exponentially. All the sudden there’s dirty data, competing queries, incorrect metadata, data locality issues, query logic problems, and the source of frustration reemerges. So, if you just got wowed by your BI vendor, ask yourself, are they using static data to show this to me? What would happen if the data was live?

The second problem is that business stakeholders assume that the end result was easy to come by.  When seeing the finished dashboard or analytics they assume that some automatic thing happened to generate those dashboards. What the business stakeholders did not see was the pre-sales rep preparing all night with a 6 pack of Red Bull. If you want to know “ease of use”, then watch the REAL development process unfold in front of you.  Most enterprise BI vendors likely wouldn’t even allow for that, because it takes a lot of trial and error to get things just right, and they don’t want to expose that perception to their prospects.

Now on the other hand, if a BI vendor IS able to whip up Analytics right in front of you, then there is a good chance that all the data processing is happening on a local laptop. In which case, you have to understand that scalability is a real concern.  This is because at an enterprise level, queries need to run where the data integrates, and not by downloading massive data sets to people’s laptops or elsewhere. Also, realize that it might not make sense to have everybody in your company preparing their own BI like some sort of Fondue restaurant. This is because the organization ends up with hundreds of variations of the same logic, thereby creating multiple versions of the truth. There’s nothing worse than paying hundreds of thousands of dollars for a BI solution that just creates arguments about who’s truth is correct.

Perhaps the biggest advice I can give is to not mistake the Data Integration & Data Management with Business Intelligence.  Business Intelligence should be 20% of the overall effort in getting data to the broad enterprise, the rest of the 80% is data integration and data management. If you were to compare your company’s data to information process to building a house, than BI would be the paint, window dressings, and decorations. The data integration and data management work on the other hand would be the excavation, foundation, framing, roof, plumbing, electrical, and so on.

Now I wish I could put a BI vendor on a pedestal and just say, “this is the right one.” The truth is that each one plays to a somewhat niche audience. I recommend you reach out to Intricity so we can talk specifically about what value you’re seeking to obtain in your BI solution. Even a short conversation on the matter can help you whittle down your options. 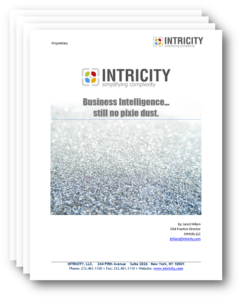 We’ve written a short whitepaper on this topic to help you understand what values might map to the BI project you’re looking to roll out.